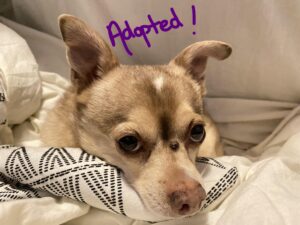 Brownie Bear has found his smile! When Brownie Bear came to YAPS his smile was lost. We tried to help him find it but we knew what he really needed was stability in a loving home.

Brownie’s first adoption didn’t work out and so he came back to YAPS until the perfect match came along. And when 2021 started, he was adopted once again. Although, this time, Brownie knows it’s Forever.

Here’s what his new family shared:

“When we first brought him home he was very nervous. He hardly trusted anyone, but within a few months he’s made so much progress. Even though it’s taken time, he’s handling our cat much better than before, and he loves people as long as they let him introduce himself first. He’s really opened up so much more the last four months than we expected. He definitely still has work to do with being a little territorial, but it’s been worth the patience. And we were even able to help him lose a little weight so far! He jumps everywhere whenever he is excited! Like REALLY jumps, so high, it’s crazy! But I think the most telling aspect of him opening up to us is his puppy-like personality. It took almost three months but he finally plays with toys, he loves to chase us around the house, and his favorite place to go is the park where he can run. At this point, you’d never even guess he was a senior dog. He definitely doesn’t act older at all! Every day is a new laugh and memory with our boy, he’s one of the best decisions we’ve ever made.”