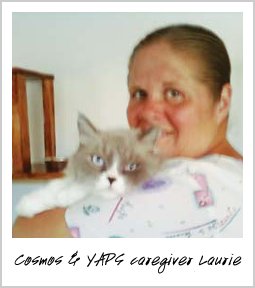 Here’s the new guy ! Boy am I in love with him !!!! I have never met a sweeter soul, he literally brought me to tears this morning because I could not get over how sweet and affectionate he is ! He was a bit quiet in the shelter, but he did greet me when I came in like he was expecting me. He is going to be perfect for our household, and already affectionate with my parents too. He made himself right at home when I let him out of his carrier, then purred and made biscuits everywhere and on me too and laid in the middle of the floor to stretch out in contentment ! He was not quite like in the picture as my first impression, he was lighter in color and fur not as lustrous as it looked or will be. A little raw food will change that in time !! I will continue to tempt him with the wide array of foods I have on hand ! My Kobe and Chloe want to know why I am opening all their delicious stash and not letting them have any ! Kobe also paws lightly and briefly at his door as if to say knock knock !!?!

All three got a good look at each other when I was going through the door, but no hissing or stress, I know they will be best pals already. So far, Cosmos wants to play with the squeak mice and peacock feathers, and seems to feel good otherwise which makes me feel confident he’s feeling fine. All I know about his past it that he was found in the San Bernardino/Riverside area and surrendered to their shelter pretty matted and unaltered. He was not neutered until five months ago when he arrived at YAPS so his head is really large since he’s about two now. Right when we met he let me look at his teeth and paws and brush him with incredible patience, and he definetly is not a biter like my other two pip squeaks ! Now when I groom Cosmos he just purrrs, wants to play with the comb and head bonks me right in the forehead, so he is coming out of his shell more already and definetly seems to know he’s home finally ! I take the head bonk as a huge compliment because it means he recognizes me as a family member, I always wanted a cat that does that ! He likes to cuddle with me when I sleep, and jumps up on the bed when I call him. This made me sad and also laugh a little to know he was in with the adult cat side but the other cats were bullying him, so they put him in with the kittens and he didn’t mind playing with them and liked their food better anyhow ! He even jumped out of my arms to get one more bite of kibble before we left! He was good as gold the whole ride home and just wanted me to scratch his chin and rub his head, then he’d poke his big white paws out of the cage as a headrest so he could watch me drive. At my first gas stop, he seemed concerned I was not coming back, but he understood me when I told him I would come right back and relaxed a bunch. After my seventeen hour day and finding my own way despite going against my maps directions, not to mention a few accidental detours half way to Hearst Castle with a lovely mountain top view of the Pacific, and also an oops to downtown LA and missing an exit too ! Despite all that, I made it home at midnight on the dot with my new friend Cosmos to find my Dad substituted regular dish soap in the dishwasher and flooded the kitchen with a nice bubbly swamp !! What a long and interesting day with a very clean finish, Ha ! Anyhow, Cosmos is definitely his name as I suspected, and not sure what force pulled us together but feel so happy we found each other! I guess the best way to describe it was as a Cosmic experience!!!! Enjoy the photos attached with one of his amazing caregivers Laurie! Now for a few more Zzzzz’s & catnaps to recover !
~ Vanessa =^._.^=