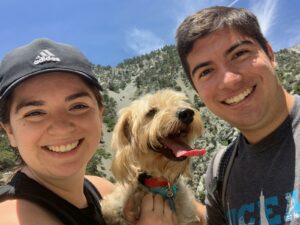 We first met D’Jango at a local shelter, he was labeled as “rescue only” for being aggressive. The shelter didn’t charge the usual $25 fee for YAPS to pull him because, well, he was scheduled to be euthanized. The YAPS Pet Care Team Manager looked in his eyes and couldn’t leave him behind to face a death sentence. She knew it would take time and she knew she would likely be the only one that could care for him for a while. D’Jango became a project dog and she volunteered hours of her time to help bring his walls down. She wanted to help him trust again. YAPS Pet Care Team, the Wags & Walk Team, and Tuesday playgroup leaders worked hard to get him out on group walks and invested the time necessary to get him to become “adoptable.”

D’Jango celebrated his one-year anniversary at YAPS and shortly after, a couple came to volunteer for a Saturday Wags & Walk. They took to D’Jango and he took to them, so they came back a few weeks later to participate in Wags & Walk and this time they called ahead to see if they could walk D’Jango. He had stayed in their hearts and remained a topic of conversation in their household. After the walk, they had an extended visit with him and they knew he was meant to be with them.

“D’Jango is living proof that we shouldn’t give up on anyone and great transformations can happen with the right amount of love and care. D’Jango has come a long way and he will continue to grow and accompany us on life’s adventures. Most of all, we would like to thank YAPS for giving this little guy a second chance to find a loving family and live a happy life,” said D’Jango’s new dad.