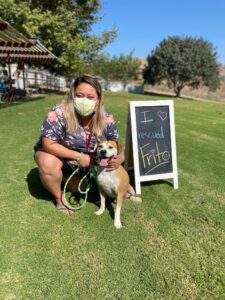 On September 7, 2017, we asked to pull the next dog scheduled to be euthanized at a local shelter.

On that day YAPS had one kennel open and we wanted to truly save a life. The dog we rescued was described as a “fearful, male, red and white Beagle Mix.” He had to leave in a crate due to his aggression issues.

We named him Frito and he made it clear that he wasn’t ready to have any friends when he first arrived at YAPS. He had an extended stay in the Canine Holding Area until we were sure he was ready to be part of the daily routine in the Adoptable Kennels.

The YAPS Team worked hard to earn his trust. He did best with confident people that didn’t hesitate with him. He was quick to lunge if he didn’t recognize a person. He was not ready to be adopted but he was ready to go on walks.

As year 1 rolled into year 2 of his stay at YAPS, we started the “Frito Fund” and began saving money to hire the right trainer to rehabilitate Frito. At the beginning of 2020, Rebel K9 agreed to train Frito and a few YAPS Staff Members. Frito’s training progressed quickly. After several months of training, Frito was finally ready to meet possible adopters.

In September of 2020, we received an adoption inquiry about Frito. We explained his story to the potential adopter and that didn’t deter her from wanting to meet Frito. Rebel K9 worked on training Frito and then worked with his potential adopter for a month. On Frito’s last visit to his adopter’s home, he didn’t want to leave and we knew he was ready. On day 1,141 of Frito’s stay at YAPS, he was officially adopted. His new mom is committed to continuing his training. Frito has found his forever and he has learned to be a loving dog.