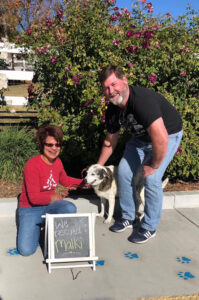 After 1,315 days, Yucaipa Animal Placement Society’s longest resident, Malki, found a home. Malki, a Dalmatian/Shepherd Mix came to YAPS on May 8, 2015, after a rescue effort that involved volunteers from the police department, fire department and YAPS.

Malki was reactive to anyone that approached the outside of her kennel, but allowed staff in to clean, provide fresh water and feed her. Malki spent well over a year learning to trust. A team was formed to work with Malki with the goal of earning her trust and helping her socialize with people. Every day she got out for free time, following volunteers and staff around the YAPS grounds after closing. During her free time, she did not allow anyone to touch her for two years. Finally, in March of 2017, Malki allowed one volunteer to pet her.

It was that volunteer, Monica Harris, that opened up her home to Malki as a foster. Monica continued Malki’s training and helped introducing Malki to new people. Malki had a few fosters and Monica continued to monitor her progress. Monica’s dog, Rio, started having health issues and when he passed, she discovered through her grief that her visits with Malki were helping her to heal. It was then that she and her husband Mark decided to make Malki a permanent part of her family. Malki moved out of YAPS and into her Forever Home on December 18, 2018.