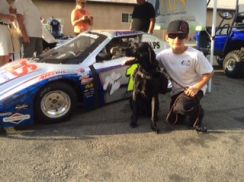 Austin Edwards is only ten years old, but he is already committed to making a difference in the community. Austin attends Inland Leaders Charter School and as part of his service project requirement, he decided to raise funds for Yucaipa Animal Placement Society through an ongoing series of donations from his car races in 2014. Falling in love with the YAPS Center and the homeless pets it serves Austin’s service project has quickly become an ongoing passion that is well into its second year.

He developed a wonderful business model that he has implemented to raise the funds at the many racing venues he visits in a season. Quick Paws for YAPS is his program and his ongoing efforts have raised well over $6,500 for the animals at YAPS. Before every race Austin can be found greeting fans and selling the paw stickers to the attendees with all the proceeds raised from the paws going directly for YAPS. The fans can purchase the stickers for $5 and decorate them to their liking and then they are placed on Austin’s race car for the duration of the racing season.

“Austin’s is such an amazing kid! His enthusiasm for our cause is inspiring,” said YAPS Executive Director, Nicole Laffey. “YAPS is fortunate to have his ongoing support. Not only is he proactive about generating funds for our pets, he also enjoys being hands on at the Center helping out every week.”

Austin races #18 in Southwest Tour truck Series and also races Bandolero Bandits, driving upwards of 70 mph at tracks all throughout the region, from the Orange Show Speedway to Las Vegas and everywhere in between. Austin is quite the driver consistently on the podium, which allows for yet another means for the young driver to raise awareness for pets every time he speaks.

“I’m really into dogs and cats and that’s why I chose to raise the money,” said Austin. “Plus I try to use my allowance to bring in blankets, toys and treats for the animals. I love the pets at YAPS and I am going to keep helping.”

Austin is currently seeking sponsors for the 2015-2016 racing season. A portion of the sponsorship goes to the YAPS Center and the rest goes towards Austin’s racing expenses and keeping him on the track to continue raising awareness for homeless pets. Those interested in helping this up and coming young driver can contact Austin’s proud parents, Tony and Heidi Edwards at (909)771-9247.