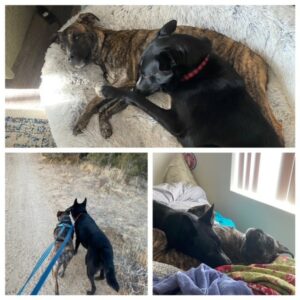 Reggie was an emergency rescue from a local animal shelter. He was at the shelter with a fractured front, left leg and he was in need of treatment asap. October 11 was a Sunday and YAPS typically doesn’t have staff to pick up pets on Sunday’s but Reggie needed help. He needed us and we already had an offer from Dr. Makar at Yucaipa Animal Hospital to perform the needed surgery free of charge.

We are ecstatic to report that Reggie has completed healed and has found his Forever Home. His new family was a little nervous at first about adding another large dog to their family. Reggie immediately worked on charming his new canine sister. He gave the entire family no choice but to fall in love in him. Reggie has a great spirit and is fun-loving boy. His family has sent us several updates documenting his progress.

Here is what they have to say:

One week from adoption, “Is it too early to say “best friends”?

Reggie is settling in perfectly. They have played played played . . . but also rested separately and together. I think we’ll start finding a new normal today now that the excitement has worn off a bit. He’s found some cozy places to call his own.

No fighting over food and water- he has already learned which food bowl is his and does not steal her food even if he finished his. Reggie doesn’t like to share his toys too well- but she is learning that. No fighting for love and attention. Both equal opportunity receivers:)

3 weeks from adoption, “They are besties. Literally. They follow each other around and are very playful and loving with each other. Truly a perfect match!”

Just want you to know how loved and cared for Reggie will be with our family. Thank you for all the care for him in his rescue, surgery, and recovery care. He is home now .”