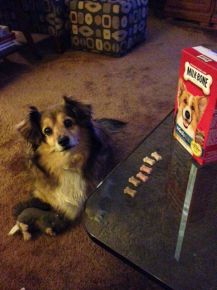 This is Kathy from the News Mirror. I am so excited to send you pictures of our Scooter!! He has been the best dog ever!!! In fact he is almost human!!  We searched all of the local shelters, some of them more than once. Then we found the perfect one, he and my son just clicked!! He was one of 4 puppies and a mom that were at YAPS. The staff had named him Scooter. My son liked that name so we kept his name. He was not old enough to be adopted yet but we were told that we could come and visit him when we had the chance (and we did) We couldn’t wait to bring him home!! When we finally got to bring him home we all immediately bonded. He has been a part of the family ever since. My son has since moved out of the house to be on his own but Scooter remains at home. He has been the best companion and friend.

We learned early that he had one favorite toy, it was a squirrel. When I say his favorite I mean absolute favorite. He will play with other toys, he will play catch forever, but his go to toy is always the squirrel. When it is bedtime he will even pick up his squirrel and take it with him. He even learned the difference between an old white sock and a new sock. We would tie a knot in the old white ones and play tug-of-war with him. He actually never chewed up any other socks. He is very smart. Even though he is older he is still learning new tricks. We put the a cookie monster alarm sound on my phone and it goes off every evening at 8:00pm to alert him and us that it is his cookie time. He gets 6 mini dog bones. If for some reason I have turned off the alarm he won’t let us forget either.

When we adopted Scooter, YAPS didn’t know his exactly birth date, but figured it to be early July so we gave him the birth date of July 4th! We thought we could celebrate his birthday with fireworks every year! This year he will be turning 14 and even though he has a little limp and gets tired more easily he is still the same sweet loving puppy we adopted from YAPS 14 years ago. He has been the BEST addition to our family that we could have ever hoped for! We have told anyone that is looking to adopt a pet to definitely go and check out YAPS!

Thank you for everything you do!