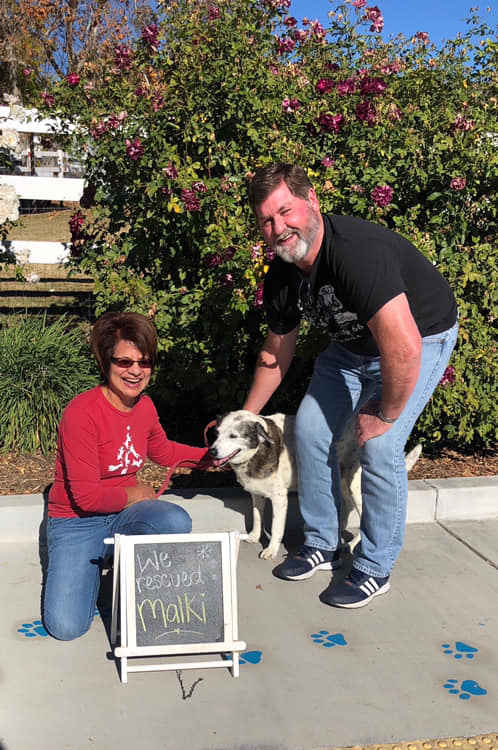 Yucaipa, CA—After 1,315 days, Yucaipa Animal Placement Society’s (YAPS) longest resident, Malki, has found a home. Malki, a Dalmatian/Shepherd Mix came to YAPS on May 8, 2015, after a rescue effort that involved volunteers from the police department, fire department and YAPS. Malki originally came in as a feral dog with 2 puppies.

Malki was reactive to anyone that approached the outside of her kennel but allowed staff to clean her kennel, provide fresh water and feed her all while keeping her distance and usually taking cover inside her igloo dog house. The plan for her rescue was to get her off the street but no one realized that she would require serious patience, socialization and rehabilitation.

Malki spent well over a year learning to trust. A team was formed to work with Malki with the focus being to earn her trust and help her open up to people. Every day she got out for free time following volunteers and staff around the YAPS grounds after closing. During her free time, she would not allow anyone to touch her and the very first time she got close enough to show her appreciation was when she licked a volunteer on July 23, 2016.

Team Malki has been consistent in their methods of training and communication. More than one person could be part of routine walks on the property and during her time in the large play yard at YAPS, it was common for a few people to sit and talk while she walked around. Naturally, Malki would join the group and lay down forming a circle as if we were having a group therapy session. During 2017, Malki started to trust people. She proved to be a great listener and was quickly becoming more comfortable around people and stopped being reactive to people or other dogs while in her kennel. The first time Malki allowed a volunteer to pet her was on March 5, 2017.

Malki went to a foster home in 2017. Her foster Monica Harris, continued her training and helped with introducing Malki to new people. Malki has had a few fosters since then but Monica Harris has continued to monitored her progress and after the recent passing of her dog, she has decided to make Malki a permanent part of her family. Malki will be moving into her new home on December 15, 2018.

If you are interested in learning more about Yucaipa Animal Placement Society, please call 909-790-1440 or by email at info@yaps.org.