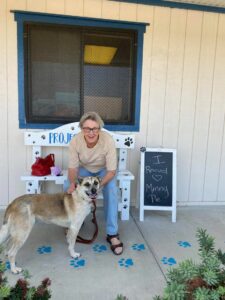 A gentleman witnessed Minnie Pie being dumped from a car in a remote area with her canine sister. He couldn’t believe what he was seeing but when the car drove off the dogs were really left behind.

He tried to find the dogs a home but he turned to YAPS when he realized he needed help. Luckily we had a spot for the girls.

Minnie met a few people but was acting aloof in her meetings. We weren’t sure what was going on with her.

On the day this woman came to YAPS, Minnie’s world stopped. Minnie focused on the woman as if she was saying, “You look familiar to me. Do I know you from somewhere?”

The woman came to YAPS hoping to find just the right dog to be her companion. She had a wish list of personality traits she wanted in a dog. Now, Minnie didn’t quite fulfill that wish list but Minnie did do something that made an impression on her.

They left YAPS together that day and have been enjoying daily walks, daily talks and the world is a better place now that they have each other.