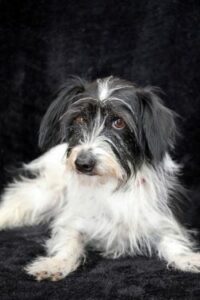 I just thought you would like to know that Snoopy has adjusted well to his new home. He seems to be pretty happy with us and we couldn’t be happier with him, minor “accidents” included.

My step-mom fell and broke her hip two months ago and it has been decided she should move back east to a home closer to her daughter. This has left my dad alone without anyone to care for, or care for him. So, Snoopy and I have both moved in to my dad’s house and he spends about 70% of his waking hours in my dad’s lap. The rest of the time he loyally follows my dad around or sleeps under his bed at night (Snoopy’s choice).

It was clear to me the day I adopted Snoopy that many of you were almost sad he was leaving, that you had grown quite attached to him, and that he has had a rough go of things. I thought you would like to know he is doing well. He shook a lot for a few days, and was very suspicious of his new situation, but now his tail is riding high and pounces in circles when one of us comes back after an absence.

Thank you so much!